When I was in high school my favorite comic book character was Green Arrow. This was in 1970, way before the character’s current hit TV series on the CW. Green Arrow (AKA Oliver Queen) was DC Comics’ superhero archer who had been around since 1941 as a cheap Batman copycat, right down to his secret identity as a millionaire, his teenage sidekick Speedy, his Arrow Cave and Arrow-Car, and a quiver full of gadget arrows. Holy Yawn, Batman! How original!

But in the late 1960s, Oliver Queen lost his fortune, was forced to live in the slums of the inner city, and his ward became a drug addict. DC wisely radicalized Green Arrow as a social justice liberal with a sleek new costume, and he became the perfect foil to the more conservative Green Lantern, an intergalactic policeman who patrolled Earth’s sector of the galaxy on behalf of the ancient Guardians of the Universe.

I hope I haven’t lost you. Trust me, this blog will all make sense in a minute. By 1970, Green Arrow was no longer featured in a regular comic book, and Green Lantern was in danger of being cancelled. DC put the two green heroes together by bringing Lantern and a Guardian observer down to Earth so Arrow could educate them on a pickup truck road trip across America, a la John Steinbeck’s   Travels with Charley. Along the way, our heroes tackled not super-villains but the social ills of the day: slumlords, environmental destruction, racism, Manson-esque hippie cults, drug addiction, and even (gasp) the evils of the Nixon administration! BOOM! The newly renamed Green Lantern-Green Arrow mag became the Number One comic book in America!

I was just a young liberal in 1970, trying to find my way in a bold new decade. Green Arrow became my new role model. He was hot-tempered, got into fights before thinking things through, and argued openly with his buddy Green Lantern. Arrow was not perfect but his heart for social justice was the core of his character. What clinched it for me was when Arrow pleaded for the Guardians to come off their perch and find out for themselves the humanity of the planet their Green Lantern agent was policing on their behalf. This may be the most iconic comic book panel of all-time: 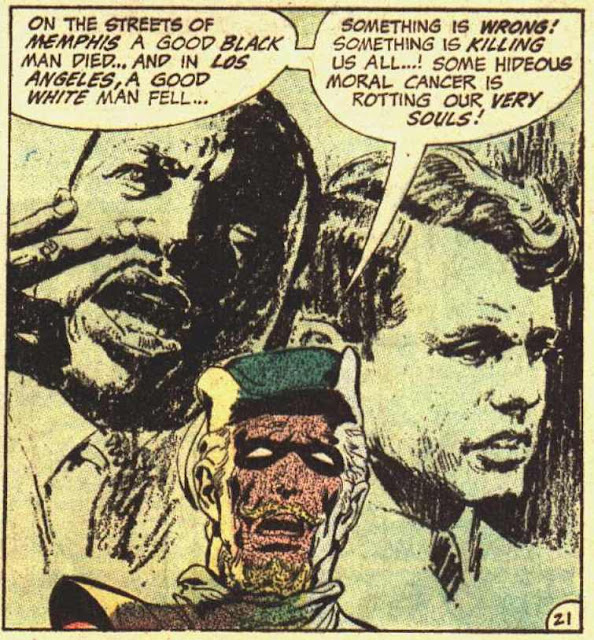 In 1970, my generation was still reeling from the 1968 assassinations of Martin Luther King and Bobby Kennedy, two shining lights who had been snuffed out violently at the hands of crazed gunmen. To see those tragic deaths cited in my then-favorite form of literature was absolutely inspiring!

Alas, it was only a comic book. If there really were a Green Lantern and a Green Arrow, would they not have prevented those assassinations? Superman would have ended the Vietnam War in ten minutes. And Captain America would have rooted out the corruption in the Nixon White House. You can see the absurdity when comic books and reality collide.

Fast forward to 2019. This summer, crazed gunmen took the lives of innocent men, women and children in Gilroy, California; El Paso, Texas; and Dayton, Ohio. In fact, as of August 5, 2019, there have been 255 mass shootings in America – more than there are days in the year, thus far! I grieve, I mourn, and I tremble in fear for our country. And I think back on something Green Arrow said way back in 1970:

“Something is wrong! Something is killing us all! Some hideous moral cancer is rotting our very souls!”

To paraphrase the famous Pete Seeger song, “When will we ever learn?”

As I said in my previous blog, I do not know why there is such evil in the world. And it seems to be getting worse in this allegedly enlightened 21st  century. I don’t pretend to have the answers, but I can’t shake the feeling that our elected officials have failed us. They have the responsibility to build a safer society in America and they have failed us miserably. Instead of legislating stricter gun laws or providing more effective mental health services for the marginalized, all they do is point fingers at each other, argue along party lines, promise “thoughts and prayers,” and then DO NOTHING.

I have never felt so powerless, and I know I’m not the only American who feels this way. But when even the President of the United States is fanning the flames of racism and bigotry, then that “hideous moral cancer” has truly sickened us, almost to the point of no return.

The operative word in that last sentence is “almost.” I still have hope, but that hope is getting slimmer with each passing day. To paraphrase yet another song from my youth:

“How many deaths will it take ‘til we know that too many people have died?”

We need new leadership, America. It’s time for us to exert our moral imperative and vote with our conscience. 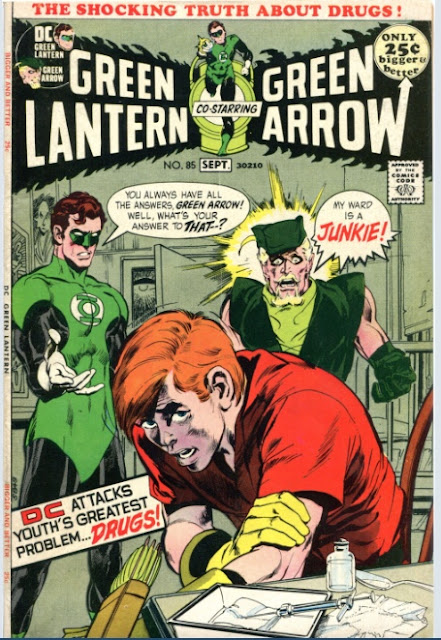 I haven’t blogged for several weeks because I’ve been busy traveling this summer and, quite frankly, I ran out of things to say. I strongly feel that if you’re going to blog then it better be worthy of your readers’ attention.

In the past several days, there have been a number of mass shootings in America: in Dayton, El Paso and Gilroy. The investigation of each incident is ongoing but they are all unified by a lone shooter who had access to assault weapons and apparently had racially-based or personal issues. The continuing escalation of these shootings is alarming and disheartening, and I feel totally helpless. What’s an average citizen of this violent country to do? As a person of faith, I can only turn to prayer.

With every shooting, it has been my sad custom to post a photo or gif of a lit candle on my Facebook and Instagram and ask for prayers for the victims and their families. This usually generates responses of solidarity, but this morning, after news of the Dayton shootings broke, I entered into the following dialogue with my friend Dennis, an old buddy from high school. I want to share this string in its entirety. 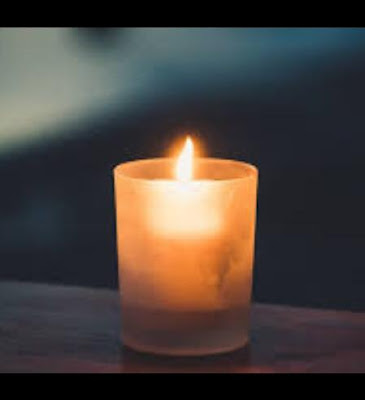 Ken: Offering Sunday prayers for victims and families affected by mass shootings in El Paso and Dayton. Will this never end? #LordHaveMercy

Ken: Maybe. I’m in the middle of Sunday liturgy right now. Will get back to you.

Ken: (a few hours later) It depends on who is saying “Thoughts and prayers.” You will notice I did not use that phrase, and I agree it rings hallow when spoken by politicians and legislators who have a direct responsibility to take action for public safety by passing stricter gun laws and providing more effective mental health services, among other things. “Thoughts and prayers,” my a$$. They need to get off their comfortable duffs and DO something! And if they don’t then we need to boot them out and elect people who will. (1 of 5)

Ken: Having said that, as a person of faith I refuse to stand by and watch people bash prayer. First, there is a general misunderstanding by many people on what prayer is. It’s NOT a way to “change God’s mind” or influence the Divine into granting a request, as if God were a department store Santa Claus. For me, prayer is entering into God’s presence in solidarity with or on behalf of those who request or need my prayers. Prayer doesn’t change God but perhaps it will change me and how I handle the things life throws at me. (2 of 5)

Ken: As the mass shootings sadly continue to escalate, it occurs to me that those victims had no opportunity to make peace with their God or say goodbye to their loved ones, an opportunity we all hope to have when we die. So I pray on behalf of the victims, that somehow in their abrupt transition from this life they indeed experienced God’s loving mercy. And I pray for strength and comfort for their families and friends. (3 of 5)

Ken: This perhaps does not make any sense to a lot of people. But as a person of faith, it’s all I can cling to at times like this. (4 of 5)

Ken: It’s also tied in with the question of evil. Why does God permit such unspeakable horrors in our world? I don’t have an answer for that. I really don’t. But that’s not going to stop me from believing. (5 of 5)

Ken: Peace be with you, Dennis.

Dennis: And also with you, Ken. Thank you for your thoughtful and prayerful reflections. I do not bash prayer. I bash empty sympathy – of which I do not accuse you of. "Thoughts and Prayers" for many mean, in essence, "You are on your own. God may help you, but I won't."

Ken: Thanks, Dennis. I did not mean to accuse you of bashing prayer. I know you are a man with a good heart. And your point is well taken about the “you are on your own” attitude.

George: (another Facebook friend) A well-spoken series of comments, Ken. I don’t use the words “thoughts and prayers” either because I have heard them too many times from elected leaders who then shirk their duties to serve their constituents and respond with real action to deal with a horrifying problem in our society. Thanks, Ken.

Ken: Thanks, George. Without bragging, I hope this string serves as an example of how it’s possible to have meaningful civil discourse on social media without resorting to name calling or mean insults.

Polite civil discourse on social media. Is it possible? Yes, if we try hard, respect people who disagree with us, and have an open mind.