Times have changed. The President of the United States is now the most vilified man in America, as evidenced by the way both Barack Obama and George W. Bush have been dragged across the mud by their political opponents. Seriously, why would anybody even want the job? But I digress.

It wasn’t that way in the early 1960s. President John F. Kennedy was respected not only by his own party but also by those who disagreed with his politics. The press even looked the other way when rumors circulated about Kennedy’s alleged affairs with other women, or about his alarming dependence on drugs and painkillers that he needed for his serious health problems. Nowadays, such issues would be fodder for the most salacious tabloid news. The Kennedy administration may have been the last to be treated deferentially by a media that had not yet grown its skeptical Watergate wings.

This aura of presidential respect extended even to children’s literature. President Kennedy made frequent appearances in the pages of Superman comic books. He would sometimes assign special missions to both Superman and his cousin Supergirl. 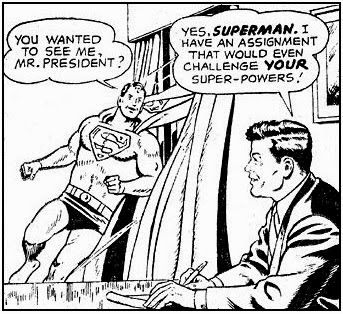 As time went on, Kennedy was portrayed as a personal friend of the Man of Steel, who entrusted the Chief Executive with the knowledge of his secret identity. Yes, President Kennedy knew that Clark Kent was Superman! 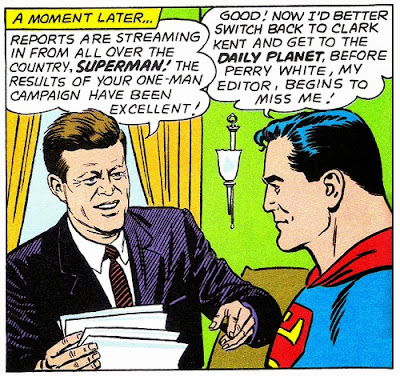 President Kennedy discusses his Campaign on Physical Fitness with Superman.

On one occasion, the President even disguised himself as Clark Kent so that Superman could appear on live TV with his alter ego! This foiled Lois Lane and Lana Lang, who were always trying to prove that Clark was Superman.

But don’t take MY word for it. Here is an excellent article that outlines the President’s many appearances in the pages of DC Comics:


The problem of this blurring of comic book fiction and reality is obvious. With all the power at Superman’s command, wouldn’t a President ask him to do more than just promote a physical fitness program for children? If there really were a Superman, chances are Kennedy would have asked him to round up the nuclear missiles in Cuba and blow the Soviet ships clear back across the Atlantic with his super-breath. But again, I digress.

As an avid comic book fan, I was delighted to read that my favorite superhero and my favorite President were good friends. Children of the early Sixties took solace in the notion that between Superman and President Kennedy, all was well and safe in our world. Alas, that fanciful idea was brutally shattered on November 22, 1963. 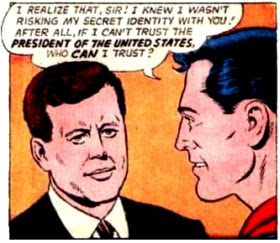 Next Blog: The Catholic President